Below is information from an engineer that we work with on many of our log home projects. This was posted in his newsletter recently and I thought it would be appropriate to share with our blog audience. Brian Sielaff is the owner of Tamarack Grove Engineering.

As we begin to wind down the year and begin a new one so do we with building codes also.
The new 2012 International Residential Code (IRC) and the 2012 International Building Code (IBC) are now finished and will begin adoption January 1st, 2013 in many states, counties, and cities.

There are several ways in which the new code adoption will affect projects. The first way is that the new codes reference the Standard on the Design and Construction of Log Structures ICC 400-2012. This code addition is the first in which log construction and design is referenced within the IBC/IRC. This code addition contains such topics like fire ratings, log settling, R-values, etc. 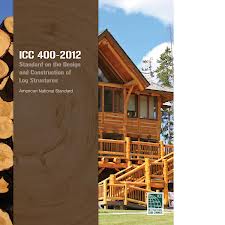 Another change that will be seen in the new codes is in the category of lateral loads, especially wind. This will affect many log projects as several log and timberframe homes are constructed on the edge of bodies of water and at the base of mountains where wind loads are their highest.

The new wind provisions require engineers to use higher pressures when analyzing a structure for wind resistance. This unfortunately will cause higher anchor bolt spacing, increased lag or thru bolt spacing, and additional hold-downs.

Another pertinent clause within the IRC is that all structures not constructed of conventional methods shall be required by the building official to be engineered by a licensed engineer in the state of the project’s location. The log and timber frame homes fall into this category and because jurisdictions don’t want the liability of a project on their shoulders they are passing off the responsibility to structural engineers.

The adoption of these new codes will be based on individual jurisdictions and locations. Each building department, whether it is the local city, county or state, will adopt the code individually. A list of all states that have adopted the different versions of the code can be found on the International Code Council’s (ICC) website at this address: . As of now, there are very few jurisdictions that have adopted the code but as the New Year rolls on into 2013 there will be more and more that do adopt this latest code version.

These items are just a few of the changes within the new set of codes and are all things that need to be kept in mind as we design and construct new log and timber frame homes going into the new year.